If you have ever dreamed of going on a safari in Africa, but haven't had the time to travel around the world, a trip to the coastal plains of South Texas to hunt the "Blue Bulls of India" is a must. In 1930 a few Nilgai were turned loose on the King Ranch and in 1941 another small herd was released onto the Norias Division. From this nucleus the Nilgai have prospered and spread. Basically, their range today is the King Ranch and most contiguous ranches.

Rusty's Charters offers the best free roaming Nilgai hunting in Texas, and that's a fact! With over 40 sq. miles of free roaming hunting area, we guarantee that you will have multiple opportunities to harvest a trophy Nilgai Bull while hunting with us. And our 100% success ratio assures you will be satisfied.​ 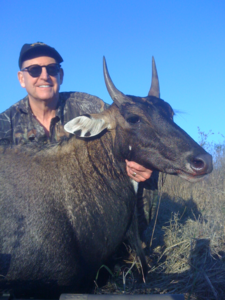 Rates (Lodging and meals not included):